The most beautiful people we have known are those who have known defeat, known suffering, known struggle, known loss, and have found their way out of those depths. ~Elisabeth Kubler-Ross~

You may not always have a comfortable life and you will not always be able to solve all of the world’s problems at once but don’t ever underestimate the importance you can have because history has shown us that courage can be contagious and hope can take on a life of its own. ~Michelle Obama~

I’m an elementary school teacher.  I work with refugees and immigrants and I absolutely love the work that I do.  It is challenging and simultaneously gratifying, and it is true what they say about teachers learning so much more from our students than we can ever teach them.  In my early days, there was a student in my school who became quite ill.  As a school community, we held several events in order to raise funds for her medical expenses.  We became “Friends for Mikaela,” and our neighborhood was well nourished by our numerous bake sales and spaghetti suppers.

Mikaela was in second grade when I became aware of her medical challenges.

“During a wellness check when I was four, my pediatrician noticed that my liver was enlarged,” says Mikaela. “He wasn’t overly worried, because organs can sometimes grow too fast. But after testing, he diagnosed me with autosomal recessive polycystic kidney disease (ARPKD).”

The condition had been present since birth.

ARPKD is a genetic kidney disease that can affect the liver, as in Mikaela’s case. The family learned that some congenital hepatic fibrosis, — which affects the bile ducts of the liver — also had begun.

“Looking at Mikaela, you’d have never known it. She was as active and playful as her older brother, Luke,” says Heather (her mom).

But, a year after her diagnosis — the night before her kindergarten dance recital — Mikaela began complaining of stomach pain and nausea.

Blood was no longer flowing through her liver. Instead, it was backing up, enlarging her spleen, and causing bleeding in her esophagus — a condition called bleeding esophageal varices.

That day, doctors told Heather and her husband, Mike, to start planning for a liver and kidney transplant for their little girl.

In July, the family left Vermont for an intense evaluation at UPMC Children’s Hospital in Pittsburgh.

“But the doctors determined that Mikaela’s illness hadn’t progressed to the point where they could place her on the transplant list,” remembers Heather. “We came back home to wait and watch.”

It wasn’t until November 2010 — when Mikaela was in 7th grade — that she would return to Pittsburgh to begin a nearly year long stay at UPMC Children’s.

By then, at age 14, her weight had dropped to 75 pounds. She had a badly distended belly and her skin and eyes had turned yellow. She would nap for hours each day. 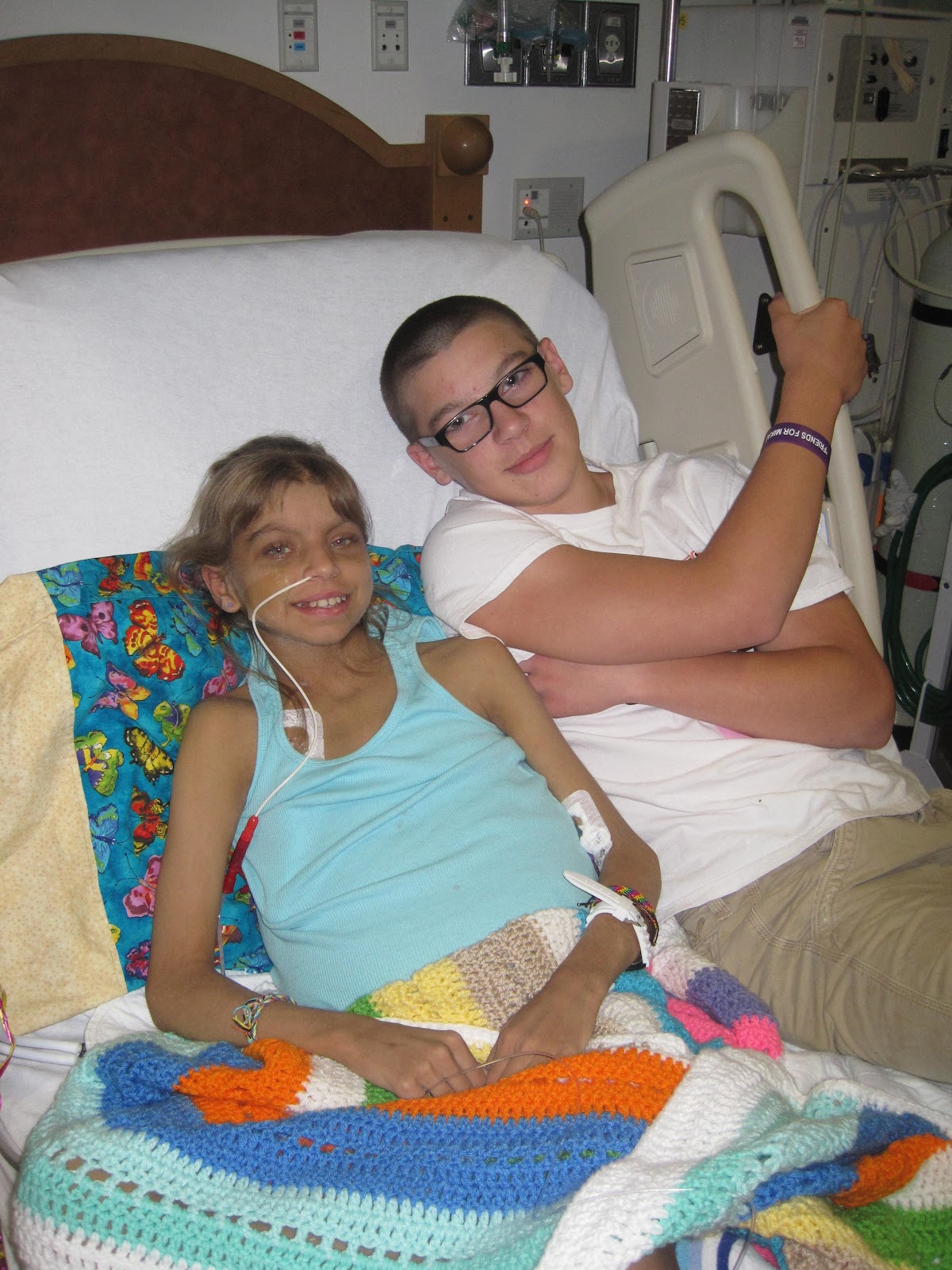 “Things were shutting down,” says Mikaela simply. “I had to start on dialysis to live.”

“The surgeons always planned to use a deceased donor for both organs,” says Heather. “But it was clear that we now needed living donors — quickly.”

The Sienkiewicz’s sent an email to family and friends explaining the dire situation and asking for possible donors.

I didn’t respond immediately, but that ask from Mikaela’s parents is what got me thinking about donating a kidney.  I wondered if I would be brave enough to do something like that.  It’s a scary thing to consider, but I think I realized then that I would at least step forward to get tested if they couldn’t find a donor.

Mikaela’s father, Mike, remembers giving blood in high school. But, he says getting out of class to donate blood was likely more motivation than altruism.

“I knew about organ donation, but I never seriously considered doing it,” he says.

All that changed when he had the chance to be a living donor for Mikaela.

“It was a no-brainer,” says Mike. “Heather was always at the frontline of Mikaela’s care. She’d been by her side virtually 24/7 for months. My only prayer was that I could be a good and healthy match for her.”

The initial plan was to perform both transplants together. But, Mikaela’s failing health prompted the transplant team to start with the liver on May 23, 2011.

Internal bleeding and frail health kept Mikaela from a quick recovery. As she gradually gained strength, she began getting ready for her second transplant.

Mike left the hospital five days after liver donor surgery. He rested for a few weeks before returning to his physically demanding job as a concrete supervisor.

“But otherwise, I was back to work as usual pretty quickly.”

A close family friend, Monica, responded to the family’s plea for transplant volunteers. Both she and Mike’s sister were potential kidney matches for Mikaela.

“It broke my heart that Mikaela had been sick for so long, waiting months for transplants,” says Monica. “I actually had researched the subject of living donors before we got the family’s email. My husband and Mike have been best friends since fourth grade. Mikaela grew up calling me Aunt Monica. I wanted to be there for her.”

Monica was determined to be the best match for Mikaela. The living-donor transplant process was thoughtful and thorough, she says.

“They check you for everything — from heart problems to skin cancer. They even want to be sure that you’re mentally prepared,” says Monica. “I was continually advised that I could change my mind. Although this is a singular journey, I never felt alone.”

Mikaela received Monica’s kidney on August 8, 2011. She soon began producing healthy urine on her own.

Monica’s stomach muscles hurt right after surgery, but she was able to manage the discomfort with pain medications.

“My mom came to watch our two children so I could take it easy for the first week or two after surgery. It did take a few months to feel fully myself again. But that was a small price to pay for Mikaela’s health,” Monica says.

“I would do it all over again in a heartbeat. The operation didn’t affect my health in any significant way. I just have a little inch-long scar to prove it happened.”

Mikaela celebrated her five-year transplant anniversary in 2016. People describe her today as “luminescent,” reports her dad.

“She’s my hero, who triumphed over every adversity with grace and strength,” adds Monica.

After spending nearly all of 7th grade at Children’s Hospital — where she kept pace with her schoolwork through tutoring and studying — Mikaela returned home to Burlington in early October 2011. By the time she graduated from high school, she was an honors student and a student leader.

This spring, in the midst of the Covid pandemic, Mikaela graduated with her BSN from Carlow University in Pittsburgh, just a few blocks from Children’s Hospital.  She was recently hired at UVA Medical in Charlottesville, working on the transplant floor.

Who would not be inspired by this family’s amazing journey and strength?  The seed had been planted in my brain.  For years I thought about it, weighed the pros and cons of donating, and tried to think of anyone I knew who needed a kidney transplant.  I consider myself fortunate that I didn’t know anyone in need.  So in 2018, for my 45th birthday, I decided I would pursue becoming a non-directed donor.  I had no idea really how to do it, so I contacted my local hospital and they helped me start the process.  On my actual birthday, I attended the informational session with my transplant coordinator, and then headed off to the lab to get my first round of blood work done.  Over the course of the next month, I went to all of the required appointments with the necessary people: dietician, pharmacist, nephrologist, surgeon, psychiatrist, advocate, and social worker.  I did all the tests, and after each one, was given the option to keep moving forward or stop the process.  We set the transplant date, December 18, 2018.  It was going to be an early Christmas present for someone out there.  I was ready to go, absolutely unwavering in my decision to move forward with the donation.  Then, as it often does, life threw me a few curveballs…

So on December 18, 2018 I did not donate my kidney. Some stranger out in the world did not get that much needed Christmas present.  And on July 22, 2019, I donated 65% of my liver to a stranger at another hospital in another state.  And on September 25, 2020, I will finally donate a kidney.  It will be exactly 2 years from that first meeting in the transplant office at my local hospital.  It will be my 47th birthday.

When I was young, my ambition was to be one of the people who made a difference in this world. My hope is to leave the world a little better for having been there. ~Jim Henson~

SEARCH FOR AN ATHLETE